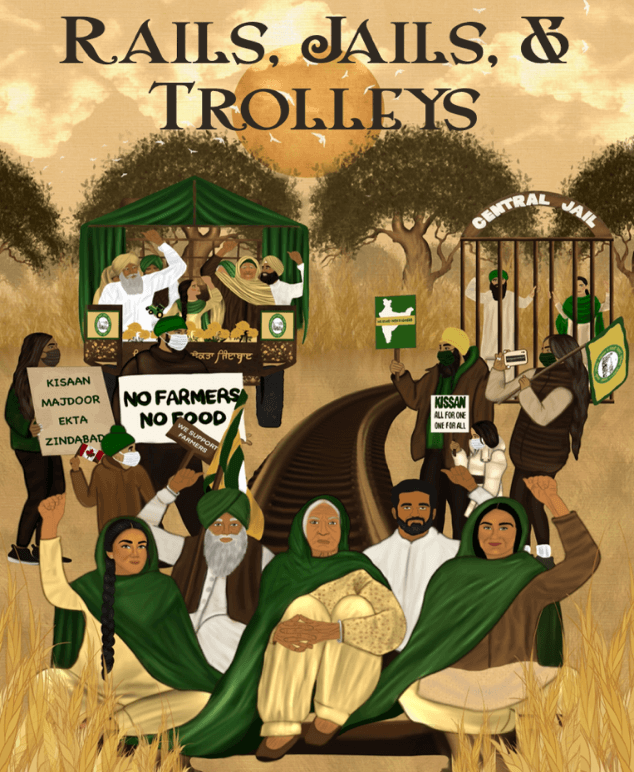 Rails, Jails, & Trolleys is a feature-length documentary, directed by Henna Mann and produced by the South Asian Studies Institute (SASI) at the University of the Fraser Valley in British Columbia. The documentary highlights the timeline of the historic Farmers’ Movement in India and the Canadian diaspora’s response to it. The film features insights from nineteen activists, journalists and academics who provide their research and knowledge on India’s history of agriculture, the ongoing economic decline in the workforce, human rights violations, and the way in which all these factors led to the largest farmers’ protest in history in 2020-2021.

Agriculture is the primary sector of livelihood for almost half of the labor workforce in India. This sector defines their sense of rootedness to farming as a livelihood, a culture, and an identity. Yet, when it comes to the future of agriculture, this sector is in steep decline. This is nothing new as the industry has been suffering for decades. Significant change occurred in the 1960s when India went through the Green Revolution, which initiated the growth of high-yielding wheat and rice crops to deal with famine in the country. The revolution was the beginning of industrializing the agriculture sector, with the introduction of new methods of fertilization and the use of pesticides. Since then, due to government initiatives, the production of wheat and rice doubled but the productions of certain other crops declined. This led to the loss of distinct indigenous crops being farmed and caused extinction. Farmers felt they were being exploited to produce high-yielding crops for the government.  Moving forward to the 1990s, corporate genetically modified seeds were introduced to increase even higher yields. Since then, farmers have been forced to take on massive loans to pay for irrigation, fertilization, and pesticides. Unfortunately, in many instances the farmers saw no return on their investments. After feeling trapped in a cycle of debt, many farmers have died by suicide.

In September 2020, Prime Minister Narendra Modi passed three new agricultural bills under the Bhartiya Janta Party (BJP). The first act eliminates the trade barriers and pushes farmers to sell their crops beyond the government regulated markets. This reduces their protection from the minimum support price or MSP, which is a set price that ensures a standard for farmers. The second act takes away food crops from the essential commodities list, allowing private buyers to hoard produce and invest in food processing and storage facilities. The third act promotes pre-fixation of price through contract farming, intended to remove the middleman from the value chain.

All three laws changed the ways in the which the agriculture industry has been working for decades. Deregulation like this produced devastating results for family-owned farms, causing a food system to become a commodity and forcing farmers to take on more debt and risk. The Indian government argued that the changes will allow more freedom for farmers, but farmers argue that the new legislation will drive down their products’ prices with no safeguards to protect them against corporate takeovers and exploitation – causing further devastation in their livelihoods. Since 80 percent of India’s farmers are small farmers, they would not have the ability to compete with corporations when it comes to stockpiling and producing on a large scale. This would give rich investors an unfair advantage and an opportunity to manipulate market prices.

The passing of the bills into laws led to the largest peaceful farmer’s protest in India. These farmers want to see the bills repealed to protect their future. The voices of these farmers spread from the small villages of Punjab to the busy highways of New Delhi – “Delhi Chalo”.

The peaceful protest turned violent when the government utilized military tactics to try to stop and control the opposition expressed by frustrated farmers. The brutality faced by protesters in India struck concern for many Indo-Canadians, most of whom hold close ties to farmers back in India as friends and families.

The Canadian diaspora immediately brought attention to the crisis in India over social media in Canada. They spread photos and videos of the protestors being attacked by the police by water cannons, tear gas, and physical abuse. It was not long after #istandwithfarmers became trending on Twitter. Protestors began incorporating “seva” or selfless service, taught in Sikhism into their daily protests. It was incorporated in a variety of ways including providing free education for underprivileged children, free healthcare services, free meals throughout the day for everyone and much more.

After 16 months of peaceful protesting, Prime Minister Narendra Modi announced that his government was going to repeal the three bills. On November 29, 2021, the farms laws were officially repealed. The government defended these laws for a year, stating they were necessary reforms to modernize India’s agricultural sector and to boost production through private investment. However, these laws were initially passed without any discussion in parliament. Modi’s decision came right before elections that were going to take place early the following year in key states like Uttar Pradesh and Punjab, who are significant agricultural producers – in attempts to win their support and votes. The farmers did not leave Delhi until December 11, 2021, after they received the official proposal from the government and decided to call off the protest at Delhi’s borders.

Rails, Jails & Trolleys documents this journey of history’s largest farmers’ protest. The ground-breaking documentary captures the electric ethos of a protest that received international attention and the resounding response by Canadians to the movement. A full year in the making, the documentary tells the story of why and how the farmers’ movement ignited a nation and youth, women, and men from all over the world. The documentary aims to educate and spread awareness about India’s Farmers’ movement and ongoing issues in the agriculture sector.