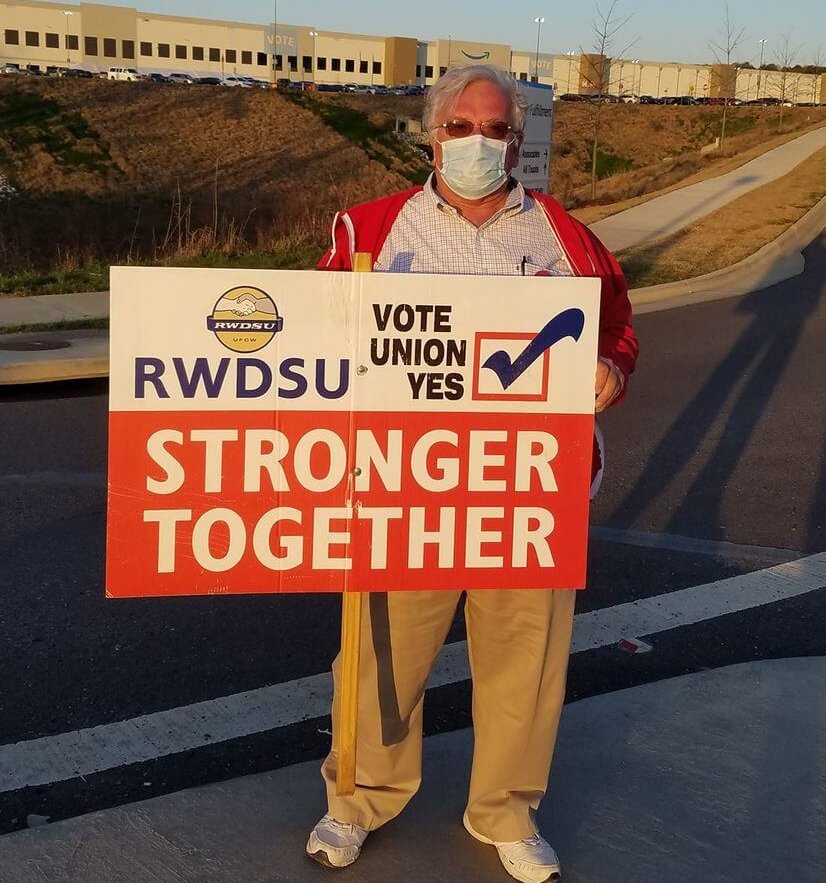 Michael Goldfield
Michael Goldfield is Professor Emeritus of Political Science and currently Research Fellow at the Fraser Center for the Study of Workplace Issues at Wayne State University in Detroit. He is a former labor agitator and the author of hundreds of articles and numerous books on race and labor, including The Color of Politics, Race and the Mainsprings of American Politics, and The Decline of Organized Labor in the United States.
View all posts by Michael Goldfield »

First, we must recognize that the overwhelming vote against the union in Bessemer marks a decisive defeat, not to be under estimated.  It will undoubtedly have a dampening effect on other workers, especially given its broad media attention, and the high expectations of many.

Yet, before dissecting what happened there, we need to recognize that this is a difficult period to organize for unions.

There is the pandemic and widespread unemployment, with the recognition that there are many other workers who are potential replacements. Threats by big companies, especially Amazon that they might just move a facility if it were unionized are widespread and credible.  Unlike coal mines or ports, which are fixed in place, logistics facilities can indeed move.  The vicious overwhelming nature of the anti-union campaign by management, has been well-documented (See, e.g., Alex Press’ recent article in Jacobin which gives a fair amount of detail).  The low level of unionization at present, especially in the private sector, below 6% nationally now presents workers with questions of support.  And, the low level of confidence in general that a union would be able or willing to do much plays a role.

The logistics industry, however, is doing well, especially during the pandemic.  It is central, not just to retail (as with Amazon and Walmart), but also more importantly to global, just in time, manufacturing.  So, it is an important arena where workers, if they organized on a broad scale, could potentially have, a great deal of leverage, what I call in my recent book (The Southern Key:  Class, Race, and Radicalism in the 1930s and 1940s – flyer attached) structural power.  The industry includes, not just warehouse workers, but truck drivers, air, railroad, but also shipping and port workers (who tend to be more unionized), and are pivotal to moving goods.

Given all this, it is important to look at the union’s strategy, comparing it to both other failed campaigns (especially of the UAW in Mississippi, Chattanooga, and Kentucky), but also to a variety of mostly less publicized campaigns which were in fact successful (An alternative argument, some of which runs parallel to mine is given by Jane McAlevey in an article in the Nation).

It is hard to know how well the union did or did not organize workers inside the facility.  What we do know is that they had only a few workers as visible spokespeople.  They seemed to rely on using other unionists to leaflet and talk to workers going in and out of the facility, and bringing in high profile people (including Sanders) to speak to supporters.  While not as sclerotic as the various UAW campaigns, this was clearly not enough.

The recipes that give a union a greater chance of success are not necessarily that radical.  Three successful campaigns are worth noting. Two are little known.  The UAW, of course, failed abysmally at the Toyota TMMK plant.  Yet, construction unions in Kentucky were overwhelmingly successful.  Toyota originally tried to hire non-union construction labor to build the plant and to do maintenance once the plant was built.  The unions defeated these proposals and gained all union workers in both instances.  They mobilized thousands of construction workers to demonstrate, including disrupting Toyota events, and exposing some of their detrimental practices.  They formed alliances with construction unions in nearby states, and nationally to refuse aid to Toyota; these other unions’ aid was vital for support.   The comparison to the UAW, which refused to engage in militant, disruptive, or mobilization tactics in the illusory hopes that they could develop cooperative relations with the company, is documented in a wonderful dissertation by my former student Amy Bromsen, Condescending Saviors: Union Substitution At Toyota Motor Manufacturing Kentucky (tmmk).

West Virginia and other teachers mobilized their constituencies in massive demonstrations.  In Oklahoma, thousands of teachers occupied the state house.  The RWDSU held no mass rallies outside the facility, involving the Amazon workers themselves.  These rallies might have emboldened activists and more reticent workers and would have taken place outside the company’s control.  As far as I know, they did not rent facilities in Bessemer or Birmingham for workers to hold large meetings.  These were also problems with the UAW approaches.

So, their mobilization tactics were not adequate.

While I have no objection to the support of political figures or entertainers (In the 1930s Paul Robeson, Josh White, Pete Seeger, and Zilphia Horton were omnipresent at union events during the 1930s and 1940s), the union did not do a good job of mobilizing their most important allies, what I call associative power.  They should have put pressure on largely Black politicians in Bessemer and Birmingham to come out actively in support.  Black elected officials in Bessemer, a town over 70% Black, who had facilitated Amazon’s arrival, played no visible role in supporting the union. The successful organizing of catfish farm workers in Mississippi, e.g., emerged as civil rights struggles, mobilizing community members and forcing political leaders to actively support them.  The appeal to Black Lives Matter sympathies, in contrast, seemed somewhat wooden.  Contrary to media reports, Alabama is not that unorganized compared to other states in the South.  With a bit under 10% unionization, compared to 3 or 4% in North Carolina and South Carolina, they have many potential allies.  They could have set up picket lines outside the facility and encouraged unionized miners, food processing workers (which they did a tiny bit), and others to join them.

And, there were not clear sets of public demands the union put forward, just dignity, etc.  They should have said, if the union is certified, we will ask for $20 or so per hour (the striking miners at Warrior Met Coal company nearby rejected well over this amount), union safety and health committees, longer and more frequent breaks and lunch periods, less monitoring by computer and supervisor, no discussion of output and breaks without a union steward present, etc., demands that could have been developed at public meetings of workers, not to put in stone the examples that I have given.

The question of control of the workplace, pace of work, monitoring, etc. is ubiquitous across industries, something that needs to be formulated precisely for each type of work.  In manufacturing, both time study and monitoring have over many decades become much more sophisticated and invasive.  The health care system has become much more regulated.  A bit of this is good, computerized checking to make sure the right patient is getting the right medicine, the correct body part is being operated on, etc.  But, the overall view that whether a procedure should be allowed by an insurance company, or even whether an emergency room patient should be admitted, often decided upon by a non-medical person, or that doctors are on time study (7 minutes for this type of examination, etc.) is outrageous.  In many cases, these types of intrusions have even led doctors at certain places to attempt to unionize.  This control is far more intense in Amazon facilitation centers and needs to be addressed sharply.

Finally, while it is necessary to organize extensively inside the facility, even at times on a non-majority basis, this is not a permanent solution.  Large companies can only be forced to bargain extensively, especially over wages and benefits, but general safety conditions as well, when the whole company is organized into a union.  This increases workers’ leverage in a way syndicalist approaches do not.  In more stable industries, even the IWW, e.g., among Philadelphia longshoremen, was forced to take this approach.  And, we might note that unionized coal miners have a leverage that they would not have if they were not unionized.  So, I have little sympathy for the syndicalist arguments, aside from their emphasis on workplace organizing and mobilization.