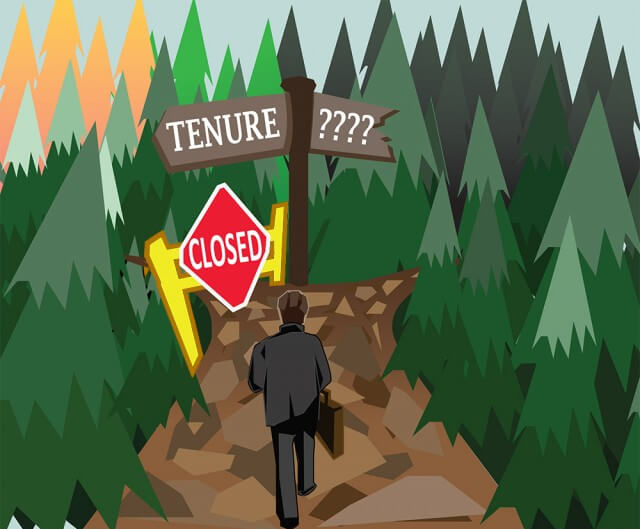 The Decline of Faculty TenureLess From an Oversupply of PhDs, and More from the Systematic De-Valuation of the PhD as a Credential for College Teaching

Contrary to what most journalists and many academics argue, an “oversupply” of people with PhDs is not the primary cause of the decline of tenure for college faculty in the U.S.

First, there is not a large “oversupply” of people with PhDs for faculty jobs in higher education, if we include non-tenure track jobs in our estimate of the “job market” for faculty. And why would we exclude those jobs? The vast majority of college faculty in the United States today are ineligible for tenure. As Marc Bousquet argued in his 2008 book, How the University Works: Higher Education and the Low-Wage Nation: “We are not overproducing PhDs; we are underproducing jobs. There is plenty of work in higher education for everyone who wants to do it. The problem is that this enormous quantity of work no longer comes in the bundle of tenure, dignity, scholarship and a living wage we call a ‘job.’” (pp. 40-41)

Second, analysis of non-tenure track employment for college faculty reveals that the replacement of faculty teaching jobs with gigs has gone hand-in-hand with the systematic devaluation of the PhD as a credential for teaching college courses in humanities, social science and STEM fields (PhDs are not generally necessary to teach in a number of professional fields). People with PhDs not only face fierce competition for tenure track positions in their fields, but must also compete with doctoral students and people with terminal Masters degrees for teaching positions off the tenure track. This has effectively undermined the bargaining position of many people who receive PhDs, and reduced college student access to instructors who have ever published original scholarship in the fields that they teach in.

It is common for journalists to describe the difficulties of people with PhDs finding work as an inevitable effect of impersonal market forces of supply and demand. Stories like “A Glut Of PhDs Means Long Odds Of Getting Jobs”, or “Doctorates Up, Career Prospects Not” follow a predictable template. First, they contrast PhD completion rates (the supply) with the number of tenure track job hires (the demand) to identity what they refer to as an oversupply of people with PhDs. Second, they use anecdotal personal stories to explore the human suffering caused by tight job markets.

The argument that there is an oversupply of people with PhDs depends upon ignoring non-tenure track jobs as part of the “demand” for college instructors. College enrollment has grown by 90 percent in the last forty years (from 11.1 million to 22.3 million), but colleges and universities have not hired tenure track faculty in sufficient numbers to meet this demand. While the total number of college instructors in the United States has more than doubled since 1980 from 675,000 to 1.4 million, the total number of tenure track faculty only increased by 22 percent. Stories of people’s struggles to obtain tenure track jobs make it appear that the job market simply cannot accommodate most people’s dreams of becoming a college professor. But they ignore that during the past 40 years, the number of faculty ineligible for tenure grew by over 250 percent, and the number of graduate student instructors grew by 123 percent.

When non-tenure track positions are included in calculations of demand for people with PhDs, the demand for college instructors appears much larger, and the supply of people with PhDs seems much less problematic. Contrary to the suggestion that it has become impossible to find work in higher education, the majority of people who received PhDs in 2014 either had a teaching job or postdoctoral position lined up when they graduated, though between 29 and 46 percent of them did not (depending upon what field they were in).

Doctoral program completion rates and the supply of tenure track faculty job openings certainly influence the academic job market. There is some evidence, for instance, to suggest that a recent spike in the number of PhDs granted in STEM fields has made it more challenging for people with PhDs to find faculty positions in the last 5-10 years. In Education and the Humanities fields, it appears that reduced hiring during the recession, not increased numbers of people with PhDs, has contributed to higher rates of unemployment for people with PhDs.

But an uncritical approach to supply and demand analysis, which presumes that most adjunct faculty have PhDs, has led intelligent observers to overstate the problem of the supposed “oversupply” of people with PhDs. No less a labor studies expert than the distinguished labor historian Jacqueline Jones has argued that the decline of tenure is largely an effect of there being an oversupply of people with PhDs in specific urban and regional job markets. At the end of her time on the American Historical Association (AHA) Professional Division Committee, which she served on from 2010-13, she reflected that

As a graduate director, I have also been struck by the fact that some graduate students deliberately limit their postgraduation job search to one narrow geographical area. Indeed, some history PhDs take adjunct and one­year teaching jobs because they want to stay in a certain area, or because they have family or other responsibilities that proscribe locational options. There are clear labor­market ramifications to these collective preferences, because employers will always be able to count on a supply of willing part­time workers. We hope that larger numbers of newly minted PhDs pursuing opportunities outside the academy will lower the supply of faculty willing to take part-time, low-paying jobs.

While workers’ “collective preferences” do have “labor-market ramifications”, Jones seems to be basing her explanation for the decline of tenure track jobs on conversations with people whose preferences have not shaped the labor market as much as she presumes.

What observers like Jones overlook when they complain about the “preferences” of people with PhDs to accept poorly-paid, temporary work is that the vast majority of non-tenure track faculty do not have PhDs. During the 2003-4 school year, the last year for which there is reliable data on the subject, only 23 percent of all contingent college faculty in the U.S. had doctoral degrees.

I witnessed the implications of both the decline of tenure and the decline’s effect upon the hiring of people with PhDs while teaching U.S. History at a branch campus of California State University in the Fall of 2015. In the History department where I taught, 60 percent of its 55 faculty were off the tenure track, and only 25 percent of its non-tenure track faculty had PhDs.

People without PhDs are playing an enormous role in the academic job market. With 66 percent of all college faculty off the tenure track, and perhaps 23 percent of non-tenure track faculty holding PhDs, it is likely that more than 50 percent of all college faculty in the U.S. do not have doctoral degrees. They are the majority. Yet observers keep blaming people with PhDs for the decline of tenure, rather than analyzing how the decline of tenure has made a PhD increasingly superfluous for getting a job as a college instructor in the U.S..

The Loss of Bargaining Power for People with PhDs

By de-valuing the PhD as a credential for college instruction, college administrators have massively expanded the supply of job candidates, thereby allowing them to reduce teaching salaries to poverty wages.

So it really doesn’t matter whether doctoral students and people with terminal Masters degrees are better or worse teachers than tenure track instructors. Nor does it matter that one may not need a PhD to teach introductory courses in Math, English composition, History, foreign languages, and other subjects that tend to be taught by non-tenure track faculty.

Higher education administrators and department chairs do not, for the most part, hire non-tenure track instructors for pedagogical reasons. They hire instructors who are ineligible for tenure— including graduate students from their own departments— because these instructors have less bargaining power than tenure track faculty to negotiate a decent salary.

The effects of this push for cheap instructors go far beyond the hyper-exploitation of those without PhDs.

For people whose doctoral degrees are in high demand for more than just teaching positions, the reduction of their bargaining power within higher education has made it difficult to negotiate wages comparable to what they can make working in the private sector. According to the National Science Foundation, even though the average unemployment rate in 2013 for people with doctoral degrees in science, engineering, health science and social science was just 2.1 percent, those who worked in higher education had lower median annual salaries than those who worked in “industry.”

For people with PhDs in the Humanities and Arts, the collapse of their bargaining power in higher education has been more severe. As the chart above indicates, whereas 95 percent of tenure track faculty in the Humanities at four year colleges in the U.S. have PhDs, only 33 percent of non-tenure track faculty do. That’s about 20 percent less than faculty in Social Sciences and Natural Sciences at the same types of institutions.

With most instructors in the Humanities not needing doctoral degrees to teach college, even at four year colleges, people with PhDs in Humanities fields have become the lowest paid people with doctoral degrees in the U.S.. The salaries for college instructors with PhDs in Humanities are not only the lowest of all faculty; they are roughly equivalent to the salaries they could receive by working in non-teaching jobs, often for positions that do not require graduate degrees.

The declining value of the PhD is not the primary cause of the decline of tenure (growing costs of education and declining public support to meet those costs are more significant). But opening faculty searches to people without PhDs facilitates the decline of tenure, because hiring instructors without PhDs undermines the bargaining power of all faculty, and thereby increases schools’ financial incentive to hire faculty off the tenure track.

The Class Divide Produced by the Decline of Tenure

Wrestling with the systematic decline of the PhD as a credential for college teaching exposes the class divide between faculty lurking beneath the surface of academic departments across the country.

Which faculty should have PhDs? Should publishing research in one’s field be a necessary a qualification for teaching at the college level? These questions have become flashpoints for serious class conflict between faculty in departments that have outsourced the teaching of their introductory courses to instructors off the tenure track.

How do you reverse the decline of tenure? Most tenure track faculty want to convert adjunct lines to tenure track lines using open searches. This approach would restore tenure in schools across the country, to the benefit of recent recipients of PhDs, and at the expense of current adjunct and graduate student instructors. Most non-tenure track instructors, however, want to promote adjunct faculty to tenure track positions without open searches, based on seniority. The conflicts over these two strategies become more heated, and more personal and potentially toxic, when they inevitably veer into ethical debates about whether schools have moral obligations to continue to employ longtime instructors who have effectively turned adjunct teaching into a career.

It is this debate over how to respond to the decline of tenure, especially as it relates to schools’ increasing reliance upon college instructors without doctoral degrees, that will be the subject of my next piece for the LAWCHA blog.

15 responses to “The Decline of Faculty Tenure: Less From an Oversupply of PhDs, and More from the Systematic De-Valuation of the PhD as a Credential for College Teaching”