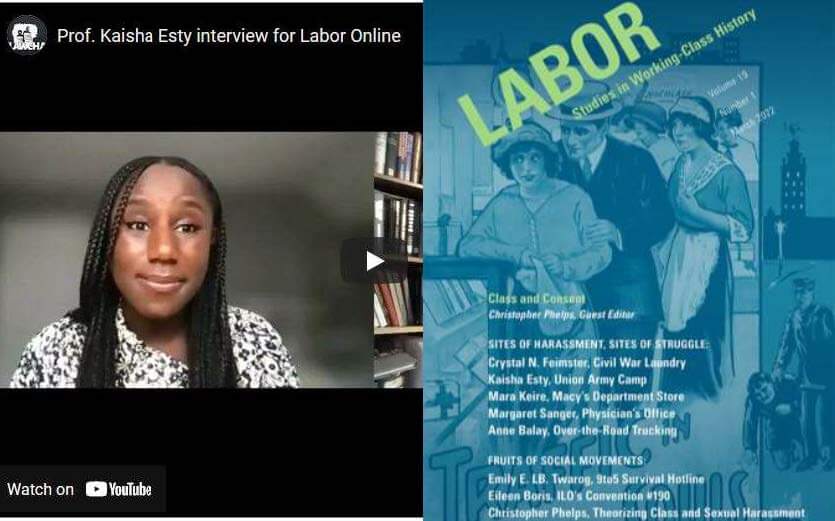 Kaisha Esty’s marvelous essay “‘I Told Him to Let Me Alone, That He Hurt Me’: Black Women and Girls and the Battle Over Labor and Sexual Consent in Union-Occupied Territory” is available for free download from Duke University Press until May 31. Listen to our interview with Professor Esty  below.

This essay is part of a special double issue on the topic of Class and Consent; it includes essays about sexual harrassment & violence in workplaces,  and workers struggles over consent by Anne Balay, Eileen Boris, Crystal N. Feimster, Mara Keire, Annelise Orleck, Christopher Phelps, Margaret Sanger (Notes and Documents),  and Emily E. LB. Twarog. The essays range from the Civil War Period to the present. For a capsule summary of the issue, read the introduction by Christopher Phelps, the guest editor, whose essay is also posted for free download. These essays show the value of using the lens of labor can offer a brilliant reevaluation of sexual exploitation.

“Spanning the Civil War era to the present, the essays in this issue reveal the extent to which recent events represent a continuation of a long-standing history of the sexualization of exploitation and violence experienced by the US working class. Contributors explore how working-class women—from launderers to sales assistants to truck drivers—reframed unwelcome advances as ‘sexual harassment’ and developed strategies of survival, negotiation, resistance, and remediation. The issue also includes The Unrecorded Battle, a previously unpublished melodrama written by Margaret Sanger in 1912 that highlights the hazards of sexual harassment faced by a young nurse. Together, the essays represent a diverse historical exploration of the racial, gendered, and classed natures of workplace power.”

During the American Civil War, laboring African American women and girls in Union-occupied territory embarked on their own war over the use of their bodies. These Black women and girls were met with  sexual violence in Union-captured territory that they had met under slavery.  Esty explains how she recovered these stories and some of the women’s strategies of resistance and their new claims on their bodies and labor in the wake of freedom.  She talks about the way that this connects to her current book project.