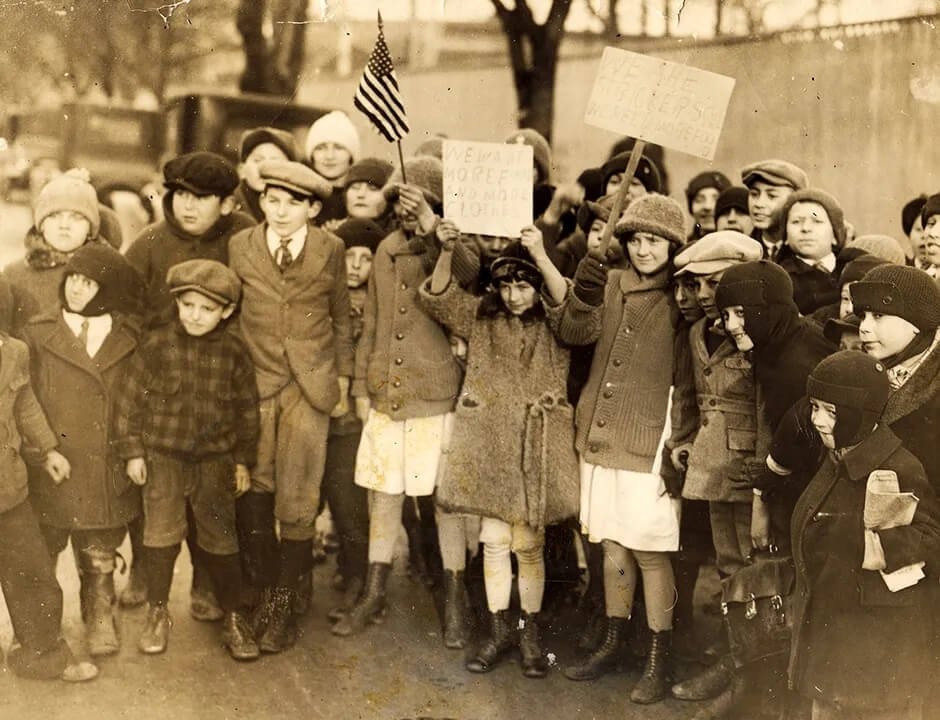 Jacob Zumoff
Jacob A. Zumoff teaches history at New Jersey City University in Jersey City, New Jersey, and researches the labor movement and the left in the interwar period. He is the author of The Red Thread (Rutgers University Press, 2021).
View all posts by Jacob Zumoff »

Labor Online interviewed Jacob Zumoff about his new book, The Red Thread: The Passaic Textile Strike last year. In the course of the interview he mentioned the way that this strike creatively used film to build support for the workers cause. That film is available online. Jacob wrote a nice wrap around essay to guide the viewing. Snippets or the entire film would be good for classroom use–another side of the “roaring 20s.”

Created by the Communist-affiliated International Workers Aid (IWA) in 1926, the seven-reel silent film The Passaic Textile strike not only documents this important strike, but elaborates concepts of working-class solidarity that, if seemingly out of place in the roaring twenties, became prominent in the Great Depression.

From January 1926 through March 1927, more than 15,000 textile workers in New Jersey struck against a wage cut, for shorter hours, and for better conditions. Remembered as the Passaic strike, it also involved wool and worsted workers in nearby Garfield and Clifton, and silk dying workers in what was then East Paterson. The largely unskilled workers—mainly immigrants from East and Central Europe and Italy, and half women—organized mass pickets and near daily meetings in the face of police violence.

The Passaic strike was the first mass workers’ struggle in which the Communist Party (CP) played a leading role. The United Textile Workers, the textile union affiliated with the American Federation of Labor, had refused to organize unskilled, immigrant, and women workers, and the CP was the only force in the labor movement willing to step in.  The CP brought to the Passaic strike  a commitment to militant industrial unionism that included all workers regardless of language, ethnicity, sex, or race. But the CP also emphasized the international working class solidarity in the struggle to get rid of capitalism altogether through socialist revolution that would create a workers’ state.

The film (courtesy below of The  Instruction  & Research Technology Department at William Paterson University) is divided into two parts. A 26-minute “prologue” tells the story of the Breznac family. Stefan Breznac, a Polish immigrant, is worked to death and his teenage daughter is taken advantage of by the mill’s big boss. The prologue—derivative of Upton Sinclair’s socialist classic, The Jungle—ends with an attempt to organize a union in the mills. The remainder of the film comprises footage of the strike itself. This includes images of strike leaders speaking, interspersed with footage of mass picketing and strike meetings. There is footage of police violence against the strikers (including images taken from a rooftop after police attacked newspaper reporters and photographers).

Significant portions of the film focus on children, young workers, and women during the strike. Again and again the film emphasizes solidarity. As one title card states: “The Passaic strike of 1926 has demonstrated the splendid solidarity of the American working class. From all over the nation, the leaders of labor have brought the lessons learned in other struggles, have brought messages of cheer to sustain courage and hard cash to feed those soldiers in labor’s battle.”  Most importantly, the film depicts the Passaic workers as actors in their own drama, not just passive subjects. Another intertitle asserts, “We will not be clubbed back into the mills, we will not be starved into submission; the American Labor Movement is behind us.”

The film was an important tool in these CP-led efforts to build solidarity and support for the strike among the labor movement. The IWA set up a system of strike relief; using donated goods and labor from union workers, especially in nearby New York City, IWA organizer Alfred Wagenknecht set up a system of “stores” to provide food and clothing to workers. This relief effort helped keep the workers active in the strike, and drew in support from workers throughout the country.

After its release in October 1926, the film was shown throughout the United States. Besides multiple showings in New Jersey and New York, this included showings in Akron, Allentown, Baltimore, Bridgeport, Buffalo, Chicago, Cleveland, Detroit, Rochester, St. Louis, Scranton, among other cites. A local of the United Mine Workers sponsored a showing in Neffts, Ohio (near West Virginia). By January 1927, had made it to the Berkeley, Oakland, and Los Angeles. Typically, local labor unions and a local relief committee co-sponsored a showing; venues included the halls of ethnic organizations, as well as large cinemas and meeting houses. Local unions often bought blocks of tickets, and local projectionists’ and musicians’ unions often donated members’ labor. Often the film would be shown for several hours continuously,  frequently with music and sometimes dancing. Funds raised were dedicated to relief efforts for strikers and their families. By dissolving the division between the audience and the drama on screen, the film sought to bring working-class viewers into the class struggle.

By early 1927, the Passaic strike was over. The strike ended in defeat, despite the militancy of the strikers, and the efforts of the Communist organizers. As the CP became increasingly active in the campaign to free Sacco and Vanzetti, the strike—and the film—receded into the past and for many years was thought lost.

By early 1927, the Passaic strike was over. The strike ended in defeat, despite the militancy of the strikers, and the efforts of the Communist organizers. As the CP became increasingly active in the campaign to free Sacco and Vanzetti, the strike—and the film—receded into the past and for many years was thought lost

The Passaic Textile Strike  remains a valuable depiction of this important, if neglected strike. The film also provides insight into efforts to organize unskilled industrial workers before the Great Depression, and police violence against such attempts. Finally, the film helps understand the politics of the early Communist movement in the mid 1920s (that is, before the consolidation of Stalinism), especially its emphasis on solidarity and the independent mobilization of the working class.[3]

Jacob A. Zumoff teaches history at New Jersey City University in Jersey City, New Jersey, and researches the labor movement and the left in the interwar period. He is the author of The Red Thread (Rutgers University Press, 2021)    A more detailed analysis of the film can be found in my “The Passaic Textile Strike Documentary: The Role of Film in Building Solidarity,” American Communist History, vol. 18, nos. 3-4 (2019): 269-95. (accessible from academic libraries)