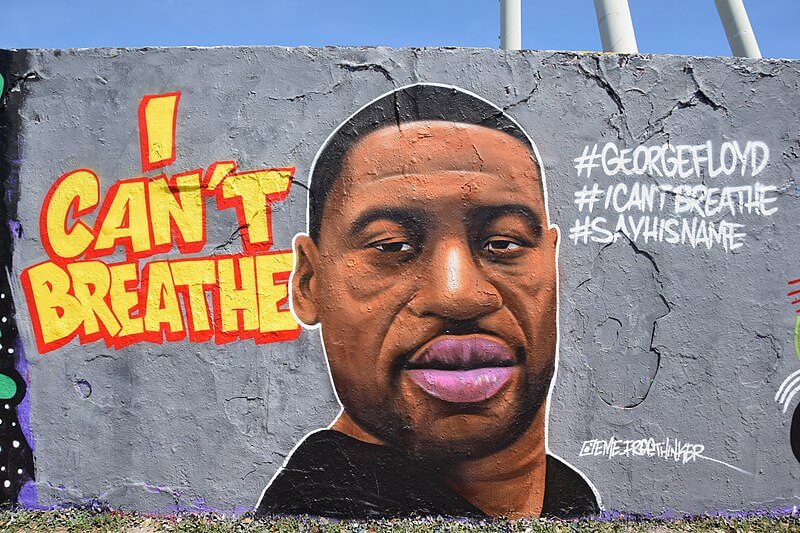 by Ken Estey on June 10th, 2020
This post was originally featured in Working-Class Perspectives: Commentary on Working-Class Culture, Education, and Politics, affiliated with the Kalmanovitz Initiative for Labor and the Working Poor at Georgetown University.

Ken Estey
Ken Estey is an associate professor of Political Science at Brooklyn College and the author of A New Protestant Labor Ethic at Work. His research centers on the intersection of politics and religion with a particular focus on labor and Christianity.
View all posts by Ken Estey »

George Floyd’s public viewing will be held this afternoon at The Fountain of Praise Church in southwest Houston. A private funeral service will occur tomorrow followed by burial in Houston Memorial Gardens Cemetery about sixteen miles south of Houston’s Third Ward, Floyd’s home for many years. Along with services in Minneapolis last Thursday and Raeford, North Carolina on Saturday, these memorials ensure his life will be remembered. Protests in the District of Columbia, all fifty states, and fourteen countries ensure the manner of his death will never be forgotten.

Another meaningful way to honor George Floyd is to reflect on how he lived his life, including the work he did, paid and unpaid. His work life reflects what many workers experience in this pandemic period — pervasive job losses for some and risky working conditions for others.  Workers of color have suffered disproportionately from both. Floyd’s life and the protests his death sparked reflect the consequences of racial capitalism.

Before he was a symbol, Floyd was  a man known to his family and friends as “Big Floyd” and the “Gentle Giant.”  Much has been made of Floyd’s physical size. But he thought big, too. Even in second grade, at Frederick Douglass Elementary School, he looked ahead with dreams about his life. He wrote, “When I grow up, I want to be a Supreme Court judge.” Floyd grew up in  the Third Ward of Houston, in the Cuney Homes where  generations of black working-class families have lived, a housing development named after Norris Wright Cuney, a  prominent nineteenth-century African American businessman and politician in Texas.

The Third Ward, a largely Black working-class area, was also home to Houston’s epic struggle for racial equality. The area includes Emancipation Park, created  in 1872 to commemorate Juneteenth, and the grocery store and luncheonette where Houston’s first sit-in occurred during the Civil Rights movement. The Third Ward was also home to Beyoncé.

After a few years away at college, Floyd returned to the Third Ward, where he began recording with DJ Screw, a central figure in Houston’s hip hop scene. Floyd recorded part of “Sittin’ on Top of the World”: “Welcome to the ghetto, it’s Third Ward, Texas.” Floyd not only made music, he also  customized cars to build in tape decks.

The challenges of living in the Third Ward overwhelmed the opportunities Floyd found there. In 1998, he was arrested on a theft charge. In 2009, aggravated robbery with a deadly weapon landed him in jail in East Texas for four years. But in 2013, he returned home to start anew. He became active in the neighborhood outreach ministries around the Cuney Homes led by Pastor PT Ngwolo of Resurrection Houston. Corey Paul, a rapper, a friend of Floyd’s who was also associated with Resurrection remembers Floyd’s approach to the work: “If it’s God business, then it’s my business.” Floyd helped with set up for ministry events. He was spotted once carrying thirty chairs at once.

Yet Floyd struggled to find work  in Houston. By 2018, he moved to Minneapolis seeking new opportunities. Once there, he continued the ministry of mentoring young people. He also found security work in a Salvation Army store in downtown Minneapolis. Later, he trained to become a truck driver and eventually settled into a combination of truck driving and security work at the Conga Latin Bistro, a restaurant and dance club in Northeast Minneapolis. His boss, Jovanni Tunstrom, said Floyd was always cheerful and had a good attitude. “He would dance badly to make people laugh. I tried to teach him how to dance because he loved Latin music, but I couldn’t because he was too tall for me.”

Floyd held that position for five years until Gov. Tim Walz’s COVID-19 stay-at-home order closed down Minneapolis just before midnight on March 27. His job became one of the millions lost to the pandemic in March and April. It was time to start all over again. The day before Floyd died, a friend gave him contact information for a temporary jobs agency.

Floyd’s biography gives us a sense of him as a person, but his work experiences also remind us of how many people struggle in an economy that values flexibility and profit over stability and good pay. In the midst of a pandemic, it is very tempting to engage in nostalgia for a pre-COVID-19 “normalcy.” But such wistfulness ignores how the intertwining strands of white supremacy and capitalist political economy create a virulent racial capitalism.

As Cedric Robinson explains, racialism inevitably permeated the social structures that emerged from capital, including the workplace, the primary site where racial capitalism is materially and painfully experienced. In this health and economic crisis, workers of color suffer the most. Even as the positive May jobs report took experts by surprise with gains in employment for white workers, black and Latinx unemployment rates continued to rise.

The murders of George Floyd and so many others make clear that black lives do not matter under racial capitalism. They are of no consequence at all. The dehumanizing manner of his death leaves no doubt. The Black Lives Matter movement rightly calls for an end to racism and police brutality. This is essential. But the protests cannot stop there.  As the economic and health effects of the COVID-19 pandemic have amply demonstrated, racial capitalism has long since deemed the bodies of workers of color only fit for whatever capital may have in mind for them. This is especially evident now in the spread of COVID-19 in the meatpacking industry among Latinx workers and among Amazon workers, most of whom are people of color.

As Keeanga Yamhatta-Taylor explains “The coronavirus has scythed its way through black communities, highlighting and accelerating the ingrained social inequities that have made African-Americans the most vulnerable to the disease.” Her essay highlights how “the state is failing black people,” but that is not an accident. The state is designed for exactly that.

That is why efforts to suppress the protests – including the military maneuver conducted against peaceful protesters in Lafayette Park last Monday to clear the way for Trump’s pathetic photo op — have been so ferocious. Racial capitalism relies on the military and police arms of the state to maintain its version of “peace” and “normalcy.”

The legacy of George Floyd’s life, his contributions to the younger generation, his unpaid and paid labor would have been significant on its own. But his legacy has become bigger that he ever could have imagined. The uplifting of his life in the breath of so many protesters honors “Big Floyd.” And the militarized response has revealed clearly the coiled snake of “normal” racialized violence at the heart of our social compact — and the willingness of the state to support this arrangement no matter the cost.