William P. Jones teaches at the University of Minneosta. He researches the 20th Century United States, with a particular focus on race, class and work. He has written books on African American industrial workers in the Jim Crow South and the March on Washington for Jobs and Freedom in 1963.

This is our third entry for this week’s roundtable discussion on Michael Goldfield’s new book, The Southern Key: Class, Race, and Radicalism in the 1930s and 1940s. Goldfield examines the failure to organize the South in the period of the workers insurgency of the 1930s and 1940s.

New Deal-era labor laws must be refreshed and improved to support and empower today’s essential workers. 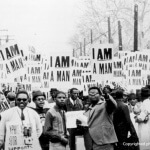 Love and Solidarity, a new film directed by Mike Honey and co-produced with film maker Errol Webber. Non-violence is not passive, but is militant and effective theory and practice. Portside Moderator Will Jones interviews Honey about the film and highly respected, long time religious leader, organizer, and educator James Lawson.