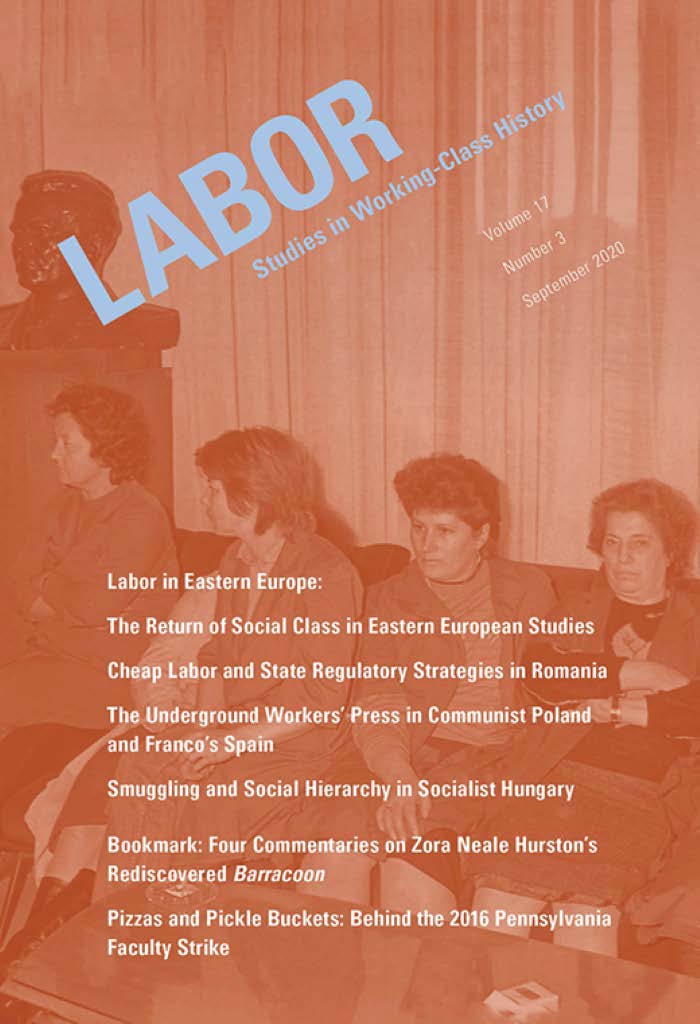 Gordon Mantler
Gordon Mantler is executive director of the University Writing Program and associate professor of writing and of history at George Washington University. His current research focuses on multiracial electoral politics and community organizing in Chicago in the 1970s and 1980s, as well as public history narratives and memorialization in Washington, DC.
View all posts by Gordon Mantler »

Rachel Riedner
Rachel Riedner is associate dean of undergraduate studies, Columbian College of Arts and Sciences, and professor of writing and of women’s, gender, and sexuality studies at George Washington University. In addition to her interests in labor organizing, she writes about global feminist activisms.
View all posts by Rachel Riedner »

We are glad to take this article from behind a paywall link at the Labor: Studies in Working Class History, and are grateful that Duke University Press will make it free for the next two months. And we are grateful that the authors, Gordon Mantler and Rachel Riedner, have provided an update for us.  This would be a great article to pass around and share with other faculty members attempting to change the power dynamics at universities.

The Labor essay profiles interviews with two activist faculty members at Pennsylvania State College on their organizing experiences and approach to creating a movement. In 2016, more than five thousand faculty members and coaches in the Association of Pennsylvania State College and University Faculties successfully struck in the union’s first ever such action in thirty-five years as an official bargaining agent. As the abstract described it: “Two faculty members active in the union reflect on their experience in a wide-ranging interview about how years of careful, often painstaking organizing made such a success possible. The strike was the product of both ten years of increasingly acrimonious negotiations and considerable tactical work by a new generation of union members who learned a number of lessons from the process, including the necessary work of persuading faculty members that they, too, were workers.”

What a difference two years make. We first sat down with Seth Kahn and Kevin Mahoney, English professors and union organizers in the Association of Pennsylvania State College and University Faculties, in April 2018 to discuss their successful strike from two years earlier. Excerpts from our interview are at the Labor link. But we briefly wanted to revisit the lessons from that time amid the unique challenges of 2020, and there have turned out to be many.

Faced with a new chancellor’s proposed widespread retrenchment and integration — in other words, layoffs and campus mergers — across the 14-university Pennsylvania State System of Higher Education (PASSHE), faculty have become increasingly worried that they may need to mobilize again. But the challenges, organizing and otherwise, are daunting. The pandemic, as it has done in many other parts of the economy, has magnified existing inequity, exposing a yawning chasm between urban and rural campuses and highlighting differences within the system instead of prompting continued solidarity. For instance, Mansfield University, one of the few employers in the state’s impoverished rural north-central, faces dire cuts. Fights over PASSHE’s response to the public health crisis, including how exactly to protect faculty, staff, and students from the virus, have compounded the situation at Kutztown and other campuses. Meanwhile, the new chancellor, while a seemingly better partner than his non-academic predecessor, continues to advocate a neoliberal vision for higher education in the state, just with a more palatable veneer.

Ultimately, the union finds itself in a difficult position and, thus, continues to keep its options open on how to respond. Both organizers believe, as Mahoney puts it, “What all of this comes down to is the organizational power of the union.” In the context of the pandemic and instability in the university system, he asserts that, “the union contract is the only thing left that is holding the (university system’s) mission together.” Certainly there are risks to pushing back against the chancellor’s recent “reforms,” including widespread retrenchment and integration of nearly half of the system’s campuses. Past union protocols, on retrenchment especially, have worked well. And yet there are risks to not using union power, as well. Kahn concludes that if the chancellor and PASSHE “are going to make a decision that has consequences, [they] should have to win an argument for those consequences… [they] shouldn’t be able to win anything without making a positive argument for the consequences for winning — that’s deliberative democracy!” At the very least, the union should compel the chancellor to make that case.