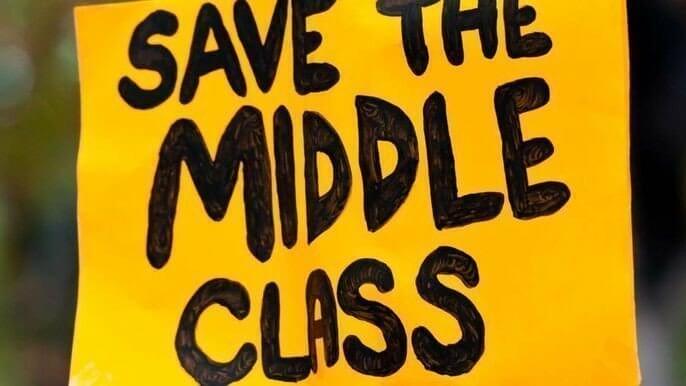 This is an English translation of a review first published https://commonware.org/recensioni/vite-di-commessi-elettori-le-elezioni-americane-e-la-middle-class )

“Once in my life I would like to own something outright before it was broken,” says Willy Loman in Death of a Salesman. It is a phrase that for David Roediger, author of The Sinking Middle Class (OR Books, 2020), sums up the middle class condition of constantly buying on credit. We could go further and say that it describes the middle class condition in general: that position is never owned ‘outright’, it is always possessed precariously and partially, and even then, is always already broken.

Firstly, there is the constant threat that it will be taken from you, the ‘sinking’ into the working class of the book’s title, the threat of your own proletarianisation. Secondly, even while you remain afloat in the middle class, that status will never be fully yours: the very nature of middle class work requires that you give not just your muscle but your whole personality to your boss. Thirdly, most of your time is spent at work, and in the little time in which you are not at work, you are plagued by anxiety, depression and addiction, always already broken, borrowing ever more money in the hope that some new thing might plug the hole. In short, the entire middle class dream is bought on credit.

Although arguing that this is a widely held condition, Roediger also says that the extent of the middle class in the USA is grossly overestimated. For instance, it is understood by both Democrats and Republicans as including anyone who earns under $250,000, that’s 96% of the nation.  This is partly ideological, America’s myth is built on a 19th Century nation of “farmers, free professionals and shop keepers”, a middle class in control of their own destiny, with neither bosses nor the remnants of feudalism to fight against. But whereas in 1829, 80% of the white male nation was self-employed, by 1940 80% worked for someone else.  The old entrepreneurial middle class had been replaced by a new salaried one of “clerks, salespeople, employed professionals and managers”, who exercised some power but had no control over production and investment. However, although the middle class now had bosses to fight against, they were still considered the country’s best defense against communism, acting as a buffer between the working class and capital. It is thus no surprise when Roediger tells us that references to the middle class rose and fell with the Cold War, only gaining popularity again with the arrival of Bill Clinton, and his attempt to win round the “Reagan Democrat”.

But Roediger points out that the overestimation of the American middle class is not limited to the nation’s myth of itself, but is also reflected in peoples’ own self-identification (or rather, mis-identification). Median wealth in the USA is low at $45,000, in nineteenth place in the world, yet upwards of 70% of people often identify as middle class, including many who work in traditionally working class jobs (however, as Roediger points out pollsters often don’t give “working class” as an option). He argues that insofar as people feel middle class this is perhaps not so much for aspirational reasons as because they share in middle class misery: experiencing a particular kind of alienation, overwork and overspending that originated in and is associated with the middle class.

Overwork, a condition Roediger argues disproportionately affects the salaried middle classes, has become mainstream: from 1980 to 2015, the average working year in the USA increased by 173 hours, amounting to a month of extra work. A fifth of American workers work for more than sixty hours a week, and twice that work for fifty hours or more. At the same time, many working class jobs have come to feel more middle class because they demand the marketing of a worker’s “personality”. Roediger argues that the first workers from whom personality was demanded were the female secretaries who entered America’s offices in the 1920s. Replacing Bartleby type figures and attitudes, they were expected to recreate the domestic sphere in the workplace, being highly productive whilst also attending to the psychological and professional needs of their bosses. This peculiar kind of deep alienation was then extended to other middle class work places and finally even to working class jobs such as heavy industry and fast food restaurants. In the same period, debt too came to be associated with middle class aspiration: Roediger argues that the Victorian middle class respectability of saving and “self-renunciation” was replaced in the 1920s with the expectation that you would invest in your own status. Access to credit was given only to those with apparently middle class virtues, and debt was reimagined as “consumer confidence”. The borrowed trappings of success could then be marketed back at work as personality. Overworked, overspent and still unsatisfied and alienated, Roediger points out that the USA leads the world in the consumption both of pornography and of church. He argues that this middle class loop of “ascetism and abandon” mean people identify as middle class “as much out of shared pain and a common sense of impossibility as from a sense of triumph”.

But what force does this self-identification have? Is even people’s belief in being middle class enough to defend against the spectre of communism? Or is the miserable and impossible middle class dream experienced as just another chain to be lost? Although briefly looking at the limits and possibilities of Marxian and Marxist analyses of the political potential (or, more often, not) of the middle class, Roediger doesn’t engage so much in actual versus perceived class locations in this book, showing simply that what is understood as the middle class contains people with “contradictory class locations” in both a material and ideological sense. And despite insisting that we must look for politics beyond elections, the book is heavily devoted to analysis of presidential campaigns and speeches. Perhaps the idea is that by breaking down the myth of the American middle class, perpetuated and reinforced in election campaigns, he might clear the way for an analysis of actual class locations and possibilities for struggle.

In electoral campaigns and presidential speeches, references to the middle class abound on both sides of the party divide. However Roediger’s book tends to focus on its use by Democrats. Bernie Sanders never stops reminding us that socialism is for the middle classes, Joe Biden calls himself Middle Class Joe, Elizabeth Warren has written three books on the subject and Obama defined himself as “a warrior for the middle class” (interestingly mentioning the poor and poverty the least of the last ten presidents).

Roediger argues that this obsession with the middle class began with Bill Clinton, and devotes a whole chapter on efforts by his campaign team in 1992 to win round the “middle class”. This was initiated through a 1985 study by Stan Greenberg on the views of people living in Macomb, an overwhelmingly white county which had gone to the Republicans in 1980 and 1984. Although the study, which later became the book Middle Class Dreams, was purportedly on the middle class, his focus groups in fact concentrated only on a very specific swing voter: the participants were all white, over 35 and had voted for Reagan in 1984, 75% were male and 25% were “housewives”. It showed that for these people economic concerns often took second place to concerns regarding race. In fact, their sense of themselves as middle class was grounded in their being white: “Not being black was what constituted being middle class; not living with blacks was what made a neighborhood a decent place to live.”

Greenberg also found that these people voted for Reagan not so much for his policies but because they saw him as a “man who stood up for himself and the average American white guy”. The views of this group of swing voters in an overwhelmingly white county were then made to stand for the middle class of the whole country. Despite its distortion, this study of the “middle class” informed not only Clinton’s campaign, but electoral campaigns for decades to come. This is unsurprising: the term middle class was a gift to politicians, simultaneously apparently addressing a majority of the nation, whilst in fact hiding a focus on a strategically important voter, with the latter being addressed insofar as they were white and suburban, rather than insofar as they were workers. The concerns of the “middle class” would thus be met through racially coded policies on immigration, crime, welfare and “integration”. As Roediger argues, calls to the “middle class” in fact always silently implied that they were white: white collar actually meant white skin.

However he also shows that in recent years explicit appeals to white voters by both parties have become more common than in the previous 60 years. For although references to the middle class are still far more numerous, there has been a marked increase in references to “the white working class”. At the same time there has also been an increase in people defining as working class (more than ever according to some studies, and reaching almost 60% among the young). Perhaps by hailing the working class as “white” politicians hope to make this re-found working classness more manageable.

Trump’s victory in 2016 has been regularly and lazily attributed to the votes of the “white working class”. However, Roediger shows that there was in fact very little shift in that group towards the Republicans between Romney and Trump. He also points out that the voting patterns of those white working class people who vote have much more in common with whites in other social classes than they do with non-whites in the same social class.

Roediger shows that the shift towards the Republicans that led to Trump’s election in 2016 was among whites in general, and more specifically among white women. This might explain Trump’s desperate call to “suburban women” on the 2020 campaign trail, reminding them that he prevented the building of “low-income housing” in their neighbourhoods: “I ended the regulation that brought crime to the suburbs, and you’re going to live the American dream […] Suburban women, will you please like me? Please, please. I saved your damned neighborhood, OK?”.

The beauty of Trump is that he says what other politicians are thinking. Almost forty years on from Greenberg’s study and they know the white suburban voter still decides the election.

Roediger’s book reminds us that the homogenous and happy middle class is a myth dreamt up by and for politicians who can prop up the dream only through appeals to a small number of white swing voters. If we want to find the potential of class struggle we might do better to look to those who are not addressed by these campaigns, including the huge percentage of the American population that don’t vote or who don’t have the vote (including undocumented migrants and more than 6% of African Americans barred from voting due to previous convictions). We could perhaps also explore why more Americans than ever are now defining as working class. And even amongst the majority who still define as middle class we might ask whether this identity still serves its purpose as a buffer against class struggle; whether it is lived as a broken dream that can end only in the suicide of the salesman or is now felt as a nightmare from which to awake in revolt.

“Gotta break your neck to see a star in this yard,” says Willy Loman.