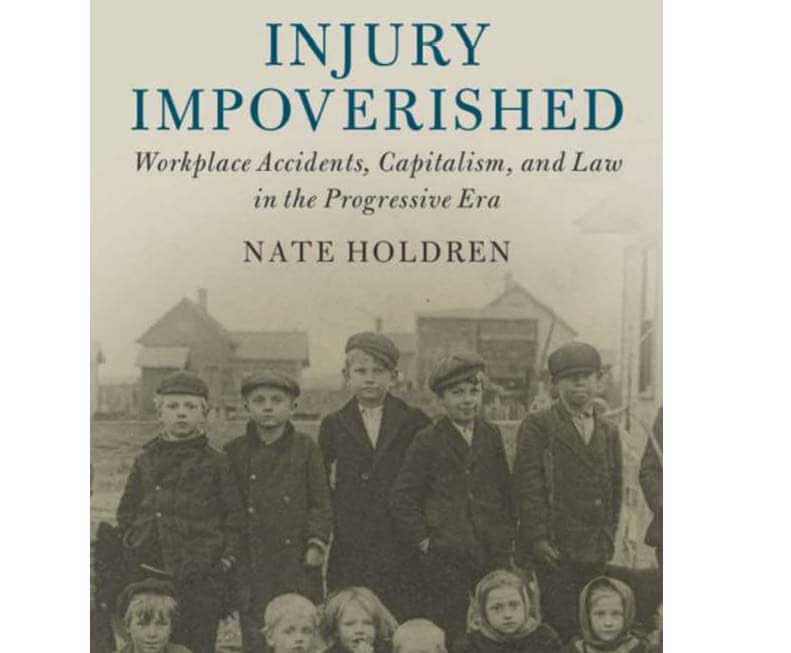 Chad Pearson offers comments on employer violence in understanding workplace injury as part of a roundtable on Nate Holdren’s  Injury Impoverished: Workplace Accidents, Capitalism, and Law in the Progressive Era, just published by Cambridge University Press. Holdren delves into the history of the emergence of workers’ compensation law in the United States. We started with an introduction by Eileen Boris and comments from  Vilja Hulden and Trish Kahle.

Nate Holdren’s deeply researched and timely book explores a series of upsetting, often overlooked stories, revealing the short and long-term consequences of workplace injuries and the enormous difficulties that victims confronted in navigating the regulations of legal and healthcare systems designed to not serve their interests. From Holdren, we learn more about the indifference and arrogance of the capitalist class: those who prioritized the “financial bottom line,” which meant “treating human beings as commodities” (226). While Holdren never loses sight of power relations, his chief subjects are those below the top bosses. His cast of characters includes lawyers, company doctors, and the working classes: those victimized, often repeatedly, by hazardous workplace conditions, legal systems that “redistributed injustice,” and healthcare structures that practiced “medicalized discrimination.” This first-rate study has prompted me to reflect on the public and labor relations of company doctors.

First, consider the basic role of doctors in our society. Doctors have undoubtedly performed important and necessary work, and in our present public health crisis, have been rightly honored for their heroic, often life-saving actions. In general, we expect them to treat patients based on their medical needs, and most have demonstrated a genuine willingness to solve our various health-related issues. Most of us trust doctors. Obviously, we recognize that our profit-driven and dysfunctional private healthcare system can adversely complicate doctor-patient relationships, but we can assume that most doctors are motivated by a desire to help patients.

Yet this was not how company doctors functioned, and Injury Impoverished describes their contradictory positions. While many may have aspired to join private practices and assist those in need while receiving high salaries and professional recognition, those who worked for big businesses found themselves somewhat compromised. In these contexts, they played far less benevolent and honorable roles. To put it bluntly, company doctors placed the interests of the firm they worked for above the health and safety of their patients, employees, and job-hunters.  These highly credentialed experts did much for their employers, including helping to improve public relations. For instance, Holdren describes how one medical doctor at the Pullman company, which critics complained suffered from ventilation problems in its cars, was tasked with the job of improving conditions and re-establishing public trust. Much like spokespersons for airlines and hotels today, Pullman’s medical director, Thomas Crowder, promoted the idea that rail travel was safe by announcing that the company was sincerely committed to the safety of its passengers. Crowder repeatedly announced to audiences that Pullman had implemented new practices, including installing new fans, introducing temperature controls on the sleeping cars, and creating new bedding to reduce contact between passengers (243). As an authority figure and expert, Crowder was in an excellent position to improve the company’s image.

Considerably more problematic were the ways company doctors helped their employers exclude certain groups of employees from work. Holdren points out that their chief job was to save money for their employers.  “Employers,” he writes, “began to gatekeep access to employment in order to avoid hiring people who had become, under the new rules for injury liability, too risky to hire” (205-6).  While employers called the shots, most did not have direct contact with blue collar jobseekers. Those decisions were often made by company doctors.  “Medicalized discrimination,” Holdren maintains, “offered a growth opportunity for entrepreneurial industrial physicians, and came at a key moment in the development of industrial medicine as a field” (222). These workplace physicians “became cost-management technicians,” responsible for keeping disabled employees from obtaining employment at numerous establishments (217). They helped their bosses by ensuring “cost-saving,” and “the savings,” as Holdren put it, “would arise from helping employers restrict” the hiring those with injuries (227).

Company doctors’ involvement in preventing many from gaining employment based on medical reasons prompted me to consider other reasons for workplace exclusion, including the common managerial practice of keeping out union members. The evidence demonstrates that employers in all periods preferred managing union-free worksites over devoting time to collective bargaining. In the late nineteenth and early twentieth centuries, employer-generated blacklists kept the most passionate labor activists from workplaces. And so-called “yellow dog” contracts—documents employees signed promising not to join unions—were also regularly used by bosses. Employers sought to avoid union members just like they refused to employ disabled people.

Given the important history that Holdren has unearthed, one wonders about overlapping cases. Did company doctors also assist their employers in denying employment to union members? Yes, they did, as two high-profile labor conflicts in the Coeur d’ Alene region of Idaho in 1892 and 1899 demonstrate. During both disputes, the powerful Mine Owners Association (MOA) enlisted the help of Dr. W. S. Sims in 1892 and Dr. Hugh France in 1899.  Both men became sheriffs, undemocratically appointed by military officials during anti-union occupations of the region. Both helped carry out strikebreaking campaigns that featured martial law, curfews, and mass arrests.

Sims, the former county coroner, eagerly collaborating with a variety of thugs, including Pinkerton agents, National Guardsmen, federal troops, and businessmen-led “law and order leagues” in 1892. In his 1961 study of the strike, Robert Wayne Smith wrote that “Sims was an energetic man who had been active in support of the mine owners’ point of view in the long crisis.  He would be an ideal sheriff to conduct arrests of union leaders.”[1]

While Sims was the MOA’s ideal assistant in 1892, Dr. Hugh France played the same basic role seven years later. Although France is hardly a household name today, he was widely despised in labor union circles for his brutal actions against the Western Federation of Miners (WFM) in 1899, when its members struggled against the infamously anti-union Bunker Hill and Sullivan Mine Company. While other mines reluctantly recognized the union, this company, led by the xenophobic Frederick Bradley (he hated Irish Americans), refused. A dramatic turning point occurred when protestors drove a dynamite-packed Northern Pacific train into the company’s mill, causing $250,000 worth of damage, in late April. Shortly after, Governor Frank Steunenberg declared martial law, President William McKinley dispatched federal troops, and military authorities replaced the popularly elected sheriff with France: the Bunker Hill and Sullivan’s doctor.

Together, a coalition of armed men, led partially by France, forced hundreds of union members and their supporters into cramped and highly unsanitary “bullpens”: open-air prisons where the incarcerated lingered for weeks. Meanwhile, MOA officials recruited scabs from several Midwestern regions.  France, who presumably had much experience evaluating the health conditions of employees and job hunters, monitored developments both in and outside of his workplace.  To leave the filthy bullpens and resume employment, jobseekers were compelled to abandon their union loyalties and sign oaths stating that they rejected militancy: “I hereby expressed my unqualified disapproval of said acts, and hereby renounce and forever abjure all allegiance to the said miners’ union, of which I was a former member, and I solemnly pledge myself to obey the law and not to again seek membership in any society which will encourage or tolerate any violation of law.”[2] France evaluated these documents, and we can assume he assessed them in ways similar to how he examined medical reports.

The alternative to working long hours at the Bunker Hill and Sullivan Company was much worse. Firsthand reports from the notorious bullpens were disturbing: widespread sicknesses, numerous fights with guards, and three deaths. Honest observers, especially medical professionals, understood that these awful conditions posed serious challenges to the health and safety of the inmates. But France, like the company loyalists in Injury Impoverished, prioritized his relationship with his superiors over the rights and health of ordinary people. He was the quintessential company man, tasked with the responsibility of weeding out unions and provided his boss with greater peace of mind.

Why did Bradley and/or other MOA members pick France for this job? Injury Impoverished offers useful clues: Bradley had presumably proved himself in his capacity as a doctor. He was probably trustworthy, refusing employment opportunities to those with preexisting medical conditions. Indeed, he likely held the view that union members, like physically disabled people, were less productive and risky. We can speculate that he was a stickler for detail, keeping scrupulous lists of the medical and labor histories of hundreds of job applicants. In the process, he helped generate blacklists, which were valuable to his immediate employer, MOA members, and those throughout northern Idaho and beyond.

Thankfully, company doctors and medical departments led by “cost-management technicians” like France faced considerable opposition from below. From Holdren, we learn that the United Mine Workers and the Industrial Workers of the World raised serious concerns about the outsized power of company physicians, and some unions passed resolutions condemning the practice of workplace-run physical examinations. Interestingly, the first demand made by strikers in Bisbee, Arizona in 1917 was the elimination of “the physical examination required now by the companies” (262).

Such demands and struggles should not surprise us, since we can identify earlier protests triggered by workers angry about having to undergo physical examinations at the hands of company doctors. For instance, those involved in the strike that led to the infamous Lattimer Pennsylvania massacre in 1897 were irritated that they had to interact with company physicians.  The hatred for company doctors was shared by the wives of mineworkers during the so-called Colorado mine wars of 1903-4. Consider a report from that period: “It is a sufficient commentary upon this subject to report that the women of the campus universally hate the company doctors and the company hospital.”[3]

We should remain suspicious of company doctors considering recent developments. Consider an example of medical corruption in the public sector. Just as I finished reading Holdren’s book, the Minneapolis medical examiner announced that George Floyd’s death was not caused by excessive police torture: “An autopsy by the Hennepin County Medical Examiner found “’no physical findings that support a diagnosis of traumatic asphyxiation or strangulation’.” Of course, we know that cops routinely lie, but many of us were probably taken aback by this blatantly ridiculous comment from a medical professional. Obviously, the multiracial, largely working-class protestors–still in the streets weeks after millions viewed the gruesome murder—remain unconvinced by these “findings.” It is probable that this medical examiner sought to provide cover to the Minneapolis police department in the same way that private sector company doctors protected the interests of their bosses.

Readers of this deeply researched and thoughtful book should not be surprised by the Hennepin County Medical Examiner’s report. Indeed, great studies like Holdren’s leave a lasting impression on readers, helping us ponder certain events in new ways, including the roles company doctors have played in public and labor relations during the misnamed “Progressive Era.” I encourage readers of Labor Online pick up a copy of this terrific study.