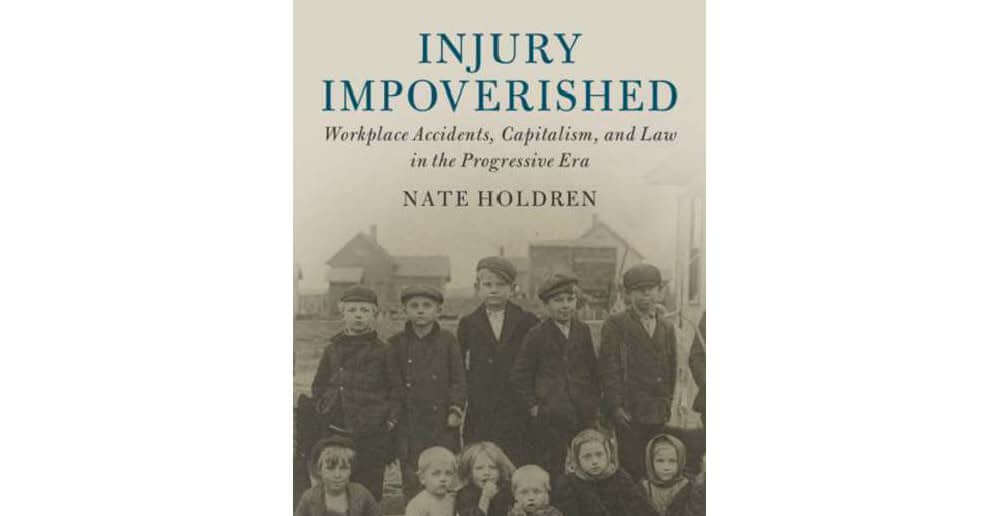 Eileen Boris
Eileen Boris is the Hull Professor of Feminist Studies at the University of California, Santa Barbara. She is the author of Home to Work: Motherhood and the Politics of Industrial Homework in the United States (1994), Caring for America: Home Health Workers in the Shadow of the Welfare State (2012), with Jennifer Klein, and, most recently, Making the Woman Worker: Precarious Labor and the Fight for Global Standards, 1919-2019 (2019).
View all posts by Eileen Boris »

Today we begin a week-long roundtable discussion on Nate Holdren’s  Injury Impoverished: Workplace Accidents, Capitalism, and Law in the Progressive Era, just published from Cambridge University Press. Holdren delves into the history of the emergence of workers’ compensation law in the United States. The roundtable was organized by Chad Pearson. Eileen Boris begins with an introduction to the series today. The commentaries that follow look at the contribution from various perspectives. Vilja Hulden (August 11) discusses the gap between reforms and the situations they are meant to correct. Trish Kahle (August 12), a historian of energy and work, brings her expertise on the struggles of miners and their vision of coal fired citizenship to the roundtable. Chad Pearson (August 13) further considers employer violence in understanding workplace injury. Nate Holdren then responds on August 14.

COVID-19 has underscored the centrality of health and safety in the workplace to worker rights. From warehouses, meatpacking, and nursing homes to groceries, farms, and transport, “essential” workers have gone without personal protection equipment. We’ve learned that occupational injury comes not only from faulty machinery, long hours, and speed-up, but also from the silent circulation of viruses under conditions of overcrowding and employer refusal to provide basic protections or even information on co-workers testing positive for the virus. Without paid sick days, with inadequate access to quality health care, and facing the necessity to earn, disproportionate numbers of Black, Brown, and immigrant women and men must go out to work. There is no sheltering in place for them.  And systems of relief—whether unemployment, occupational health and safety rules, or worker compensation—have proven inadequate.

Now Nate Holdren comes to tell us why worker compensation is not only lacking but deeply flawed. Injury Impoverished is an interdisciplinary mediation on the commodification of life. In charting the shift from the tyranny of the trial to the tyranny of the actuarial table, Holdren illuminates the biopolitics behind worker compensation. This deeply humane study (yes, Marxist history can be humanistic history) joins theory to storytelling. It places the study of disability into conversation with the history of capitalism. With compensation guided by notions of income replacement, labor power defines value.  The loss of living, the very fullness of life, lacks worth.   But there is no price that can make up for  workplace damage among people whose life became interrupted and those who grieve their deaths, maiming, and debility. Such calculations, built into the law and public policies, guided by a science forged to reduce risks to business enterprises more than individuals, turn flesh and blood workers into so many tools of production.

Money, never enough, by itself could not restore worker dignity.  As Holdren writes, “Pecuniary damages were moral money with the amount calculated through economic means; non-pecuniary were moral money with the amount calculated through non-economic means” (39).  The racialized gendered meanings of insurance, created for convenience of those with more power, comes through as Holdren stresses the social meaning of injury, disability, and price. Assumptions about male breadwinning and the heteronormative family guided awards for injury, as did mechanisms of payment to widows set to control their remarriage and intimate lives. Normative conceptions of able-bodiedness curtailed work for those whose  bodies differed. Industrial physicians shaped systems that defined normality and led to screening via medical examination of potential hires through eugenic principles to lessen business costs. Under such circumstances, formal equality under the law begets inequality before the concept of reasonable accommodation, itself a concept that embeds an ideal body, under the Americans with Disabilities Act and other remedies. 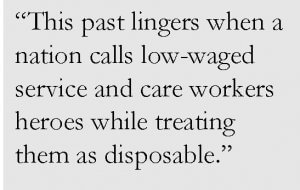 Instrumentality clashed with social reform, which was at least concerned with well-being, but neither allowed working people to define the terms of either workplace risk or the common good. Holdren offers us, then, insights for the false dichotomy of today—protect the economy or protect workers—by showing how constructing worker compensation to lessen employer liability impoverishes those already paid less and undervalued by their race, gender, racialized gender, age, and feminized jobs. This past lingers when a nation calls low-waged service and care workers heroes while treating them as disposable.

The commentaries that follow this introduction explore Injury Impoverished from multiple angles. A scholar considering questions of who governs the workplace and what that means for large questions of democracy, Vilja Hulden (August 11) discusses the gap between reforms and the situations they are meant to correct. Trish Kahle (August 12), a historian of energy and work, brings her expertise on the struggles of miners and their vision of coal fired citizenship to the roundtable. Chad   Pearson (August 13) further considers employer violence in understanding workplace injury. Nate Holdren then responds (August 14).