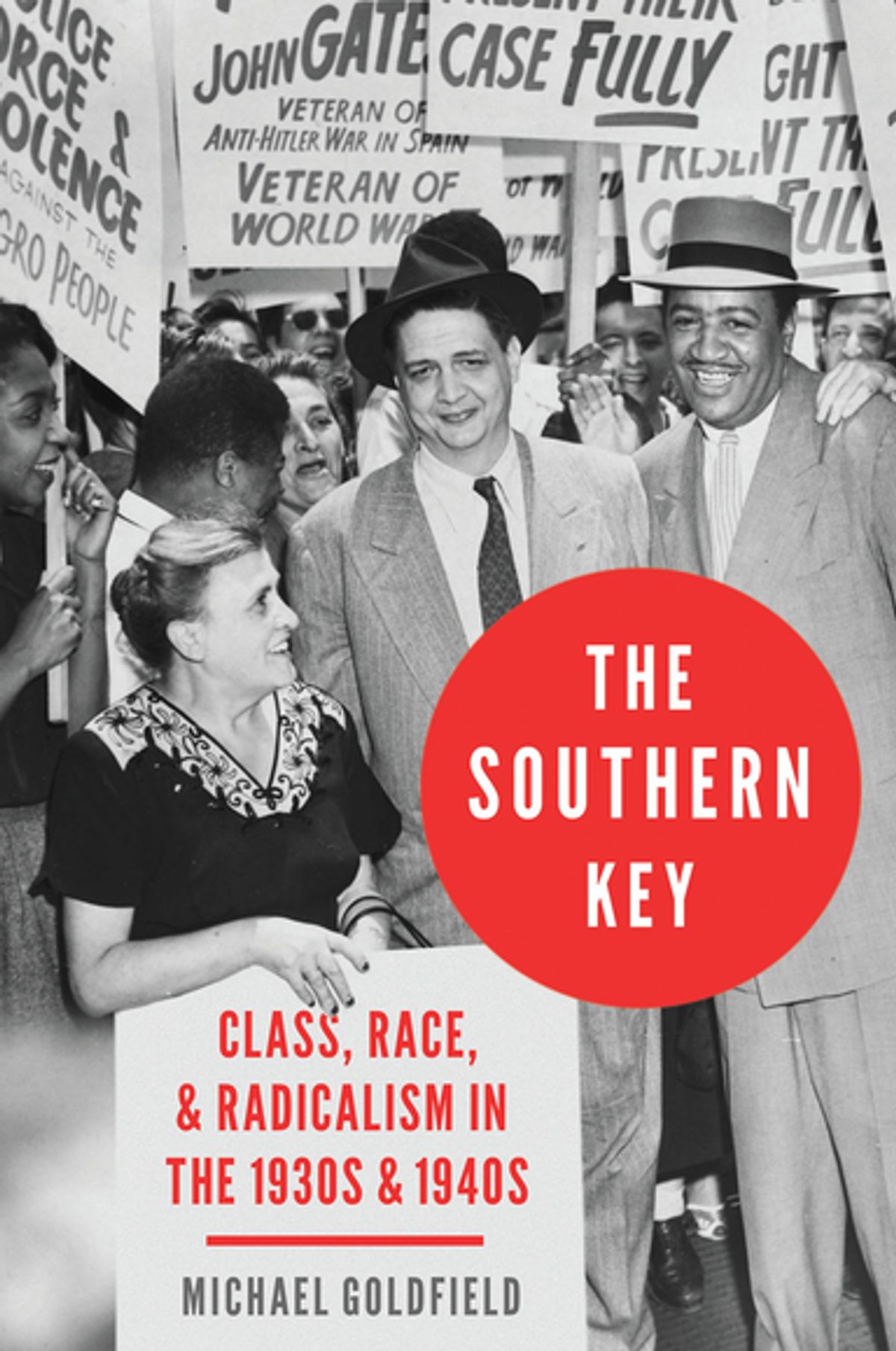 William Jones
William P. Jones teaches at the University of Minneosta. He researches the 20th Century United States, with a particular focus on race, class and work. He has written books on African American industrial workers in the Jim Crow South and the March on Washington for Jobs and Freedom in 1963.
View all posts by William Jones »

This is our third entry for this week’s roundtable discussion on Michael Goldfield’s new book, The Southern Key: Class, Race, and Radicalism in the 1930s and 1940s. Goldfield examines the failure to organize the South in the period of the workers insurgency of the 1930s and 1940s. He argues that the fate of the South determined the fate of the nation, and that unionization was the key to transforming the region. He asks important questions about whether it could have been organized, examining an extensive array of published and archival sources.

July 13: James Gray Pope discusses the key premises of The Southern Key, suggests the evidence Goldfield presents makes for a usable history, and he suggests they raise important questions about the role of democracy in unions and radical organizations. July 14: Ahmed White focuses on Goldfield’s treatment of the Steelworkers union, and then raises important questions about counterfactuals and repression. July 15: William Jones questions whether Goldfield has addressed the intersection between law and politics adequately, and suggests he neglects the organizing that continued outside the Communist Party orbit. July 16: Rosemary Feurer appreciates Goldfield’s survey of the South through “an organizer’s eye,” especially his discussion of the potential of timber and wood workers, but wishes he had contributed a more sustained discussion of how Left organizing was distinctive. July 17: Michael Goldfield writes a robust rejoinder to the key themes and questions raised by the reviewers.

Laws, Votes and Working-Class Politics in the Jim Crow South by William Jones

On May 24, 1943, four thousand white workers rampaged through a shipyard outside Mobile, Alabama; wielding pipes, wrenches and bricks to drive “every one of them Niggers off this island.” Sparked by the promotion of twelve black men to skilled welding positions, and followed by similar attacks in Beaumont and Brownsville, Texas, as well as Los Angeles, Detroit and Chicago, the violence in Mobile illustrated with horrific clarity the challenges faced by labor and civil rights organizations during the Second World War. The Congress of Industrial Organizations, which had attempted to build an interracial union at the shipyard, shifted resources to eastern North Carolina where unions had already gained some support from mostly African American workers in sawmills and logging operations on the Atlantic coast. The National Association for the Advancement of Colored People, which had pushed the CIO to support the integration of skilled jobs, accepted a compromise where Black welders were assigned to racially segregated crews.[1]

Michael Goldfield is correct that the retreat from interracial organizing had longstanding effects on the social and political history of the South and the United States more broadly, but he understates both the barriers to industrial unionism and the degree to which labor and civil rights activists overcame those challenges in the decades following the Second World War. His broad reading of scholarship across major industries, both locally and internationally, provides an important corrective to scholarship that has generalized from local studies of particular industries to explain the region as a whole. Yet he often loses sight of the local context in which industrial unionism emerged. We hear nothing of agriculture or domestic service, which remained the largest employers in the region; or important services or trades such as the building trades, transportation and public services. More importantly, Goldfield dismisses the importance of local and national politics and, focusing narrowly on ideological differences among union leaders, loses sight of the broader political context in which they acted.

Goldfield goes to significant lengths to debunk “the myth” that New Deal labor laws were “all or most of the impetus” for the success of industrial unionism in the 1930s and 1940s, but overlooks scholarship that describes a more complex interaction between laws, workplace militancy and politics (63). Few historians view laws as the sole or primary cause of union growth, but many find that they played important roles in encouraging workers to unionize, protecting them from violence and repression, and creating space for political mobilization and alliances. Robert J. Norrell points out that labor conflict in Alabama, which both he and Goldfield see as the most promising state for industrial unionism in the 1930s, cannot be understood in isolation from the fact that Jim Crow laws disfranchised nearly all workers, both black and white. Unions challenged that exclusion by paying members’ poll taxes and by organizing interracial teams to register voters, but they lost ground as populists who had supported New Deal economic policies in the early 1930s united with pro-business conservatives to prevent federal reforms from undermining white supremacy later in the decade. State and local laws restraining unions and civil rights organizations paved the way for a nationwide backlash in the 1940s and 1950s. Laws alone cannot explain the rise of unions in the 1930s, but their erosion was critical to their defeat in the 1940s and 1950s.[2]

The political context is also critical to understanding the alliance between industrial unions and civil rights organizations, which Goldfield credits with the success of unions in the 1930s and 1940s but pays little attention to in the 1950s and 1960s. The Mobile riot was sparked by an effort to enforce President Roosevelt’s ban on racial discrimination by defense contractors, which had been secured by the March on Washington in the 1941. Elijah Jackson, a Black CIO organizer who was transferred from Mobile to North Carolina, found that civil rights activists shared labor leaders’ fear that labor militancy would provoke an even broader outburst of violence. NAACP field director Ella Baker, who worked closely with Jackson and other labor activists, told him that some compared the violence of 1943 to the white supremacist coup in Wilmington, North Carolina, that destroyed Reconstruction and installed a Jim Crow regime half a century earlier. “So many of the old timers have the position that there is no need for such an organization and are quick to tell you what happened in Wilmington years ago,” she wrote to Jackson in 1945.[3]

The backlash forced Jackson, Baker and other labor and civil rights activists to adjust their approach to interracial cooperation, but they did not, as Goldfield suggests, abandon their objective of transforming the South. Goldfield concludes with a counterfactual speculation about what might have happened if the “labor-based civil rights movement” of the 1930s had survived into the 1950s and 1960s, but says little about Jackson, Baker and others who sustained alliances between civil rights and labor movements after the Second World War. He laments the explulsion of Communist-led unions from the CIO, but says little of the Brotherhood of Sleeping Car Porters, the International Ladies Garment Workers Union, District 65 and other non-communist unions that sustained close ties to the civil rights movement in the 1950s and 1960s. He details the rise and fall of the National Negro Labor Council, but never mentions the much broader and more influential networks of black trade unionists that coalesced around the Negro American Labor Council and the revived the March on Washington in 1963. It’s true that those efforts were undermined by the weakness of industrial unionism in the South and the conservative backlash against both labor and civil rights organizations, but they provide important lessons for the conservative moment we find ourselves in today.[4]

The Southern Key provides a valuable overview of industrial unionism in the South, but ultimately focuses too narrowly to explain the political history that Goldfield seeks to understand.

[2] Robert J. Norrell, “Labor at the Ballot Box: Alabama Politics from the New Deal to the Dixiecrat Movement,” The Journal of Southern History 57:2 (May, 1991).