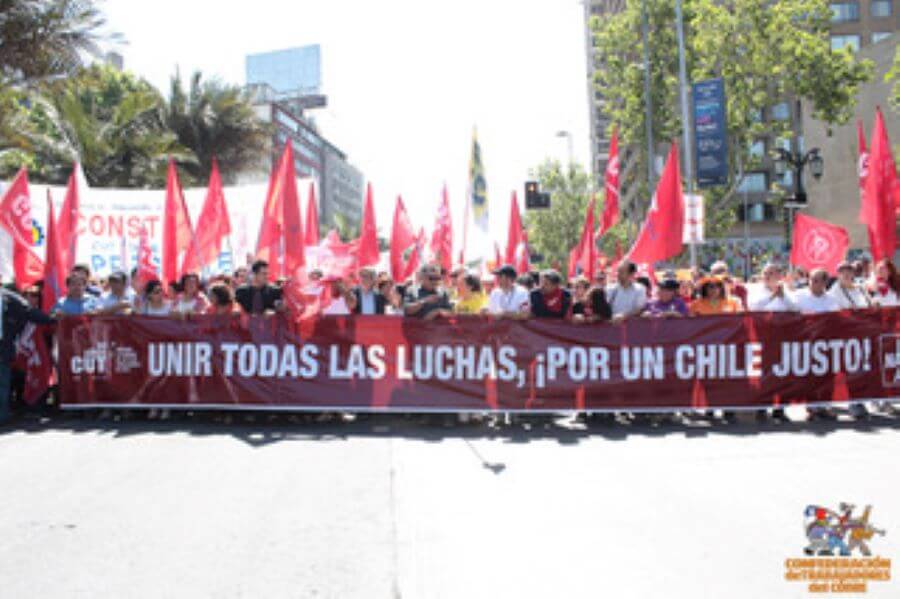 Workers and the Struggle for Social Justice in Neoliberal Chile

Angela Vergara
Ángela Vergara is a professor of history at California State University, Angeles. Her research focuses on Chile’s modern social and labor history. She is the author of Copper Workers, International Business, and Domestic Politics in Cold War Chile (2008) and co-editor of Company Towns in the Americas (2011) and the special issue of Radical History Review, The Other 9/11: Chile 1973 – Memory, Resistance and Democratization (2016). Her new book project explores unemployment policy in twentieth-century Chile.
View all posts by Angela Vergara »

Labor rights and working conditions are at the heart of the struggle for social justice in Chile today.

On Wednesday, November 13, 2019, sanitation workers in Santiago walked off their jobs, shutting down garbage collection in 42 of the 52 municipalities of Chile’s capital city. They joined a national movement that has mobilized hundreds of thousands of people in demand for social justice and the end of a political and economic system that has stripped working Chileans of their “dignity.” Sanitation workers’ most basic demands, such as the right to use a restroom and have a clean place where to have lunch, symbolize the lack of labor rights and protections in Neoliberal Chile, especially for those working in low paid jobs, many of whom are also immigrant workers. The strike also sheds light on the obscene inequality that exists in the country. While trash collecting companies have thrived by signing lucrative contracts with municipal governments, their workers are putting up with unsanitary and dangerous working conditions and shifts of more than ten hours a day. Trash collection has become a profitable business for a few companies that have benefited from privatization and subcontracting of public services at the expense of workers’ fundamental rights such as the right to a safe working environment.

Labor rights and working conditions are at the heart of the struggle for social justice in Chile today. With a few exceptions (such port workers in Valparaiso and mine workers in the north of the country), labor unions were not visible in the many marches and demonstrations that have swept the country for about a month, but this invisibility reflects the consequences of more than 35 years of draconian labor laws that have stripped workers of their most basic labor rights. Today’s massive mobilization is about the impact of neoliberalism on workers’ legal and economic rights and, as people have made it clear across the country, the legacies of dictatorship and the failure of the post-dictatorship democracy to transform the economic model. When Chilean students protested the hike in the fare of the subway, they did it for their parents who are working ten to twelve hours a day, for their older siblings who ride a bike across Santiago’ dangerous streets delivering food for Uber Eats or who work flexible shifts in Walmart, and their grandparents who received a pension below the minimum wage. The protests, then, are above all the right of working people to a fair salary, social security, and a voice in their workplace and the political system. It is not only about the economic inequality, but the absolute power of employers and companies, such as Trash collectors, that makes it almost impossible to overturn that inequality.

Under the military rule of Augusto Pinochet (1973-1990), the imposition of neoliberalism required de-regulating the workplace, silencing workers, and reducing the power and influence of labor unions. In 1979, José Piñera, brother of the current president, introduced the Labor Plan, a series of decree-laws that severed workers’ rights to form unions and bargain collectively. Together, these reforms imposed an individualist view of work and eroded the basis of collective action and the power of the union movement including bargaining rights, unionization rights, and the right to strike. Further “reforms” were intended to flexibilize the labor contract, making it easier for employers to hire and fire workers at their own discretion. The labor reforms were part of the so-called seven modernizations that included the privatization of the pension system, health care, and education. In 1987, the dictatorship approved a new labor code, which was replaced in 1994, but its principles continue to regulate labor conditions in Chile. The erosion of labor rights had become the foundation of Chile’s economic system, a sort of mantra that sustained the fantasy of Chile’s economic miracle, but has furthered inequality.

Following the return of democracy, labor demands have been constantly postponed, and the labor movement has lacked the power to transform the legal framework. Arguing the need to foster economic growth, attract foreign capital, and join free trade agreements, politicians and economists have argued against any reforms that could “increase” labor protections and labor costs. When workers’ organizations have demanded an increase in the minimum wage (at least 23,3 percent of Chileans working full time earn the minimum wage) or reduce the working week (one of the longest in an OECD country), the business sector and its powerful political allies have argued that they would be unable to stay in business and, thus, would be forced to lay off workers. In 2016, the government of Michelle Bachelet passed one of its most emblematic reforms, a reform of labor relations, that promised to “emparejar la cancha” (level the playing field). The reform guaranteed the right to strike, one of the longest demands of labor organizations, and unionization rates have increased in the last decade (from 13 to about 20 percent). However, the 2016 reforms have not been enough. Juan Moreno, president of one of the labor unions at Walmart, said that the reforms have failed to empower workers, and workers still face enormous obstacles to form a union, especially in small plants. More importantly, Moreno explained, employers continued to have a lot of power, and while the right to strike is now protected, “post-strike retaliation is already a common occurrence.”

The difficulties to reduce the working week highlight the neoliberal framework that defines labor rights in Chile. Chile has one of the longest working weeks (45 hours) among OECD countries, only surpassed by six other countries (including Russia and Mexico). When in May 2019, the House started debating a proposal to reduce the working week from 45 to 40 hours, Felipe Larraín, Minister of Finances and member of one of the wealthiest families in the country, argued that the project would cost the state between $1,9 to $2,4 million dollars and, thus, was “unconstitutional”. As a counter offer to the project presented by the two most popular communist representatives, Camila Vallejos and Karol Cariola, the right-wing government offered a project that emphasized a flexible working week of 41 hours that could promise to balance people’s work, family, and studies. The flexibility, the labor movement argues, opens the door to many abuses and cannot protect workers from working long shifts, one of the many problems in the workplace.

During the national uprising that started the past October, the Central Unitaria de Trabajadores (CUT), Chile’s most important labor confederation, explained that workers were fighting for better pensions and access to public education, but also because of the “long history of abuses, corruption and inequality, not only of income, but also of privileges and treatment that millions of workers live daily”. The CUT presented to the country a list of proposals (Pliego Social) that includes

As in the past, labor leaders and members understand that their struggle is not only about economic demands and the increase in salaries and benefits, but about changing the political and economic systems that regulate and limit workers’ rights and give employers the upper hand in bargaining. In 1983, the Confederation of Copper Workers called for a national strike, the first of a long series of national protests that challenged the military government. Workers’ problems, copper workers declared, were not about “one law” but “a complete economic, social, cultural, and political system” that oppressed them. Today, Chilean workers and their children, those students who started the movement by jumping on the subway and who have fought back against the police, are fighting for social justice, and that justice is not only about a legal reform or a few more dollars at the end of the month, but about the right to have an equal voice in the workplace, the political system, and society. To do so, workers and labor unions must have a seat in the Constitutional Assembly and help to guarantee that labor and social justice become the cornerstone of Chile’s new constitution.